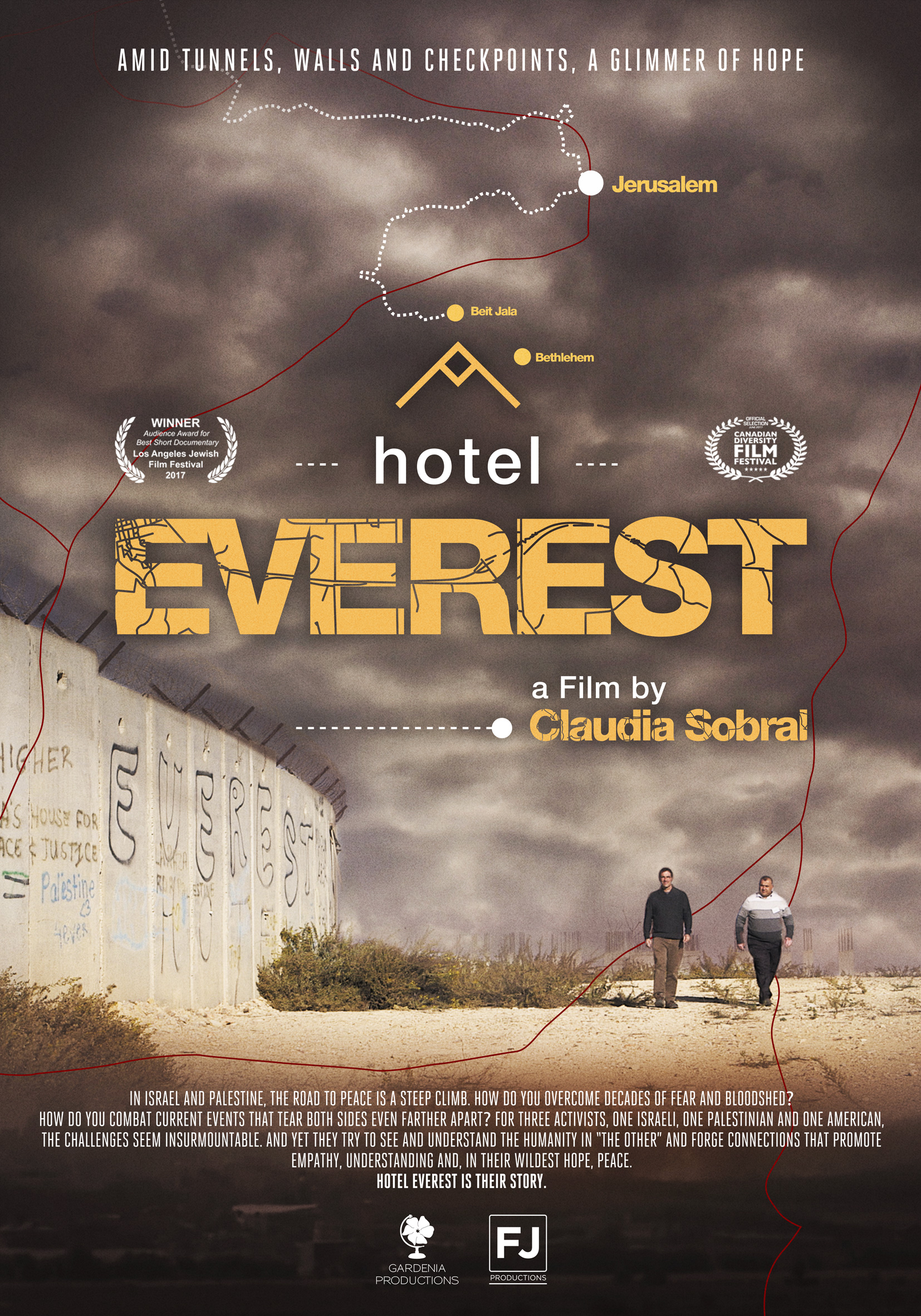 In Israel and Palestine the road to peace is a steep climb. How do we overcome decades of fear and bloodshed? How do we combat current events that continue to tear both sides farther apart? For three activists: Israeli, Palestinian, and American - the challenges seem insurmountable. Yet understanding the humanity in “the other” forges connections promoting empathy, understanding and maybe someday - peace. Hotel Everest is their story.

A highly creative and performance-driven operations professional with extensive media industry management, operational and technical broadcast experience within the entertainment industry. Julio Sobral was responsible for the broadcasting and technical operations for all of the cable and satellite television channels owned by the Fox International Channels in Europe and Africa. He was directly responsible for than 100 cable channels launches in more than 30 European and African countries using traditional broadcasting and new technologies.

Fabio Golombek oversees all FJP productions in the United States since 2002. Fabio, as the president of FJ Productions, coordinates a number of programs such as The Hollywood News Report TV (HBO and syndication), Hollywood News in 3D (Sky and Orange), As Ultimas de Hollywood (SONY Entertainment), Hollywood Buzz (TNT) and 2 seasons of Hollywood Uncut. Since 2010, he has produced Bed and Breakfast, a feature film starring Dean Cain and Juliana Paes which was distributed worldwide, The Brazilian (Mariel Hemingway, Dean Cain & F.Machado) and co-produced Open Road. He is currently in production of Like Sunday, Like Rain (Written and directed by Frank Whaley), El Camino and Arigo. He is also the executive producer of the award winning show Planeta Brasil (TV Globo International), and producer of shows such as Shape Up (Fox), Shop the World, Martial Arts 360 and Zen Zone. Fabio is a member of the Producers Guild of America PGA, IDA and NALIP.

Sobral’s involvement with documentary filmmaking began in 2005, she worked on several documentary film projects at SD Cinematografica, as a researcher. A trip to Berlin in 2006 ignited her curiosity about the life experiences of descendants of the Nazis. As a third generation in a (extended) family of Holocaust survivors, this topic is of personal interest to her. The results of her research and several interviews provided her with materials to produce and co-direct her first documentary titled The Ghosts of the Third Reich. Ghosts was broadcast on National Geographic Channel in Asia, South America, Europe and Australia and on History Channel Italy. It had screenings in Brazil, Uruguay, Monaco, South Africa, China and Israel. As well it has been screened both nationally and internationally at countless film festivals, schools and cultural institutions. Along with her film work, Sobral has over 15 years of experience in the museum field and community arts both in New York and Los Angeles.

Chris received his master’s degree in film production from USC. He has directed and edited documentaries, short films, and music videos, and his work has been seen around the world by over a million people. He has edited for The History Channel and the Sundance Institute. His credits include the feature documentary Hava Nagila (The Movie) (editor, post-production supervisor); the feature documentary Blessed Is The Match (assistant editor, post-production supervisor); the documentary Mimi and Dona (editor); music and concert videos for The Killers (writer, director, editor); the feature film Cyrus (apprentice editor); and the short film The Liar (writer, director, editor).

Elias Nawawieh is a Based in Bethlehem, Palestine, Elias has traveled extensively throughout Europe, the Middle East, and Africa. He is passionate about documenting personal stories. He has been covering the Israeli-Palestinian conflict for almost 8 years.

Andy Lawless is a 25 year veteran of theater, film and television production.  He has won Telly Awards for commercials and has made documentaries on global health issues in South Sudan, Kenya, Rwanda and Uganda. Andy has completed production on his documentary From the Ground Up, about a group of Harvard students who took on the number one killer of children on the planet, malnutrition.  While continuing to pursue engaging human interest stories, Andy is also producing, directing, editing and shooting for Idaho Public Television. He is based in Boise, Idaho.

Harvey Stein is filmmaker, camera man and editor from New York City, who has lived and worked in Israel/Palestine since 2006. Stein has shot many journalistic videos for websites including: Time Magazine, CNN, Tablet, Jewish Daily Forward, Israeli Foreign Ministry, GlobalPost, VJMovement, Israel21c, and others. His feature documentary, “A Third Way – Settlers and Palestinians as Neighbors,” about the work of Rabbi Menachem Froman, was released in the Summer, 2015.

Carlos Zarattini, is a music composer and bass player based in Milan, Italy. Started his musical life studying piano at the age of 10. Graduated in music composition, in his early career gained experience playing live with different bands and artists. He dedicated his professional activity as a composer and producer of original music for advertising, broadcast, films and documentaries. In the past 10 years, Zarattini has collaborated as a musician and sound designer with Media companies in Italy such as Fox International Channels, Sky Italia, Discovery, and Mediaset. He also writes original production music for some of the most important record labels in this area (Primrose Music and RTI in Italy, Sonoton in Germany).